Juventus came from a goal down to beat Tottenham Hotspur 2-1 in the second-leg round of 16 of the UEFA Champions League at Wembley Stadium on Wednesday.

Juventus went through 4-3 on aggregate despite being held 2-2 in the first-leg back home.

They join Liverpool, Real Madrid and Manchester City as the four teams who have so far qualified for the quarter-finals of this season’s Champions League.

In the other second-leg tie on Wednesday night, Basel came from 1-0 down to beat Manchester City 2-1 but still go out 5-2 on aggregate.

The first-leg ended 4-0 to City in Switzerland. 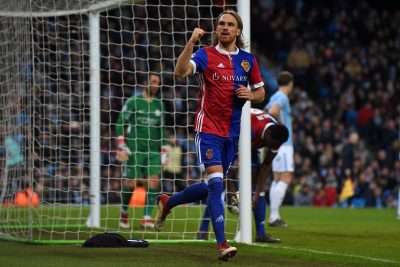 The defeat was City’s second in the Champions League this season.

Spurs had the first attempt on goal in the third minute through Son whose left-foot shot was parried away by Gianluigi Buffon.

Harry Kane should have put Spurs ahead on 14 minutes after rounding Buffon but saw his effort hit the side netting.

Juve had a shout for a penalty on 19 minutes turned down after Jan Vertonghen looked to have tripped goal bound Douglas Costa.

Spurs continued to create scoring chances and went close on 32 minutes but Dele Alli’s shot close to the edge of the box went straight to Buffon.

Spurs’ persistent pressing was rewarded as Son made amends for his earlier miss as he slotted in Kevin Trippier’s low cross to put his side 1-0 up.

Miralem Pijanic almost equalised for Juve a minute later but saw his effort from the edge of the box slightly off target.

Dybala had Juventus’ first chance in the second half on 63 minutes following a poor clearance from Davinson Sanchez which Dybala volleyed over the bar.

Juventus were back on level terms on 64 minutes as Higuain slotted the ball past Hugo Lloris off Sami Khedira’s assist.

Dybala made it 2-1 on 67 minutes as he raced on to Higuain’s through pass before slotting into the roof of the net.

Spurs almost levelled up on 77 minutes but Chiellini made a timely clearance to deny Kane from connecting with Son’s dangerous cross.

In the 88th minute Chiellini made a vital block from Eriksen on the edge of the box.

In the last minute of regulation time Barzagli made a goal line clearance after Kane’s header came off the post.