A 20-year-old woman who says she wants to get out of debt is auctioning off one of her buttocks so that a bidder can select a tattoo for it.

Bailey Price, from Wellington in New Zealand, has advertised the 9cm x 9cm space on her bum via the Trade Me website.

The 20-year-old, who works in a surf shop, says she’s doing it to “get out of debt” -but admits she has a “bubbly, crazy personality” which has meant people haven’t been surprised by her unusual decision.

“I’m a pretty wild girl so most people who know me wouldn’t be surprised that I’m offering the winner of this auction to have anything tattooed on my butt.
“Obviously, tattoos are forever so who could say no to a life time of advertisement. I am also well known for mooning my butt in public, lol. (sic)
“You may be waiting to bid on this auction for a vary (sic) of ideas: marriage proposal, business promotion, an artist wanting to share design or just because yolo.
“10% of the winnings will go towards a charity of your choice.”

Bailey lists several conditions as part of her auction – that the tattoo is only allowed to be a maximum size of 9cm x 9cm, it’s only allowed on one cheek (but they can choose either left or right) 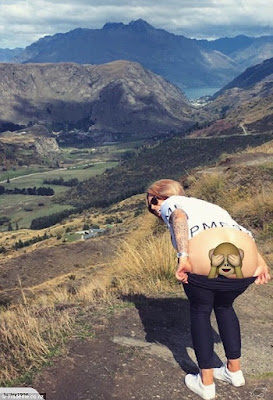 If the winning bidder is in the Wellington region, then she is inviting them to come and watch the tattooing take place.

And best of all? The winner gets a framed photo of the finished product.

So far, her bum canvas has attracted bids of thousands of New Zealand dollars, and at the time of writing it’s currently selling for $2,460. 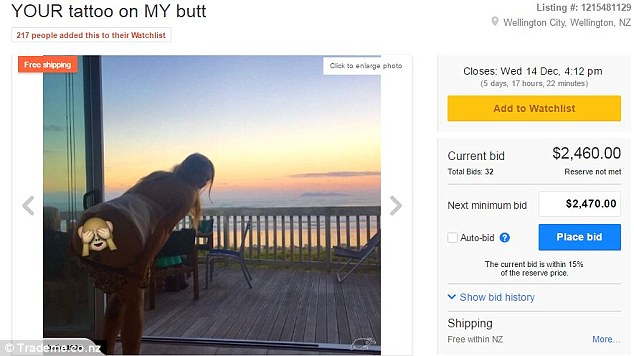 But there’s still time to get a bid in, if you’re interested – the auction doesn’t close until Wednesday, December 14 at 4.12pm.

Bailey told Stuff that her mother knows all about the auction but “has given up on disagreeing on all my tattoos, and I’m sure she would be happy with me not asking for loans off her all the time.”